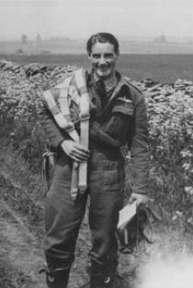 To the Lord Mayor Rotterdam in the Netherlands

Soon the 29th of April 1995 will be the 50th Anniversary of the most rewarding experience of my life. I was an Australian Pilot, captain of a composite crew, Australian pilot, Navigator, Wireless operator, and four others, in my opinion, great Englishmen. Our aircraft Lancaster PA235, Coded LSE, RAF Squadron No. 15, From Mildenhall.

From boyhood I held an ambition to fly with the RAF, however this operation gave more appreciation and satisfaction than I ever had envisaged.

From 200 feet above Rotterdam, the view below brought tears to my eyes - laughter and tears - the reception given by your people below was overwhelming!

People standing on rooftops, on balconies, hanging out from windows - in the streets and in the fields - all with their eyes up, laughing nd waving with handkerchiefs, and with Dutch flags, proud, and with English flags and banners "vive la Tommies"

Under the suppression endured, to produce these symbols and such a welcome - what an effort and what a welcome - which at last seemds to make it all worthwhile.

Please thank your people for the crew of Lancaster LS-E 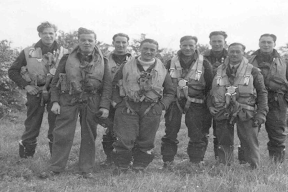 Best regards to all Rotterdam

P.S. Our bomb aimer, Charlie Fuller, RAF, was injured in the arm by small-arms fire from the ground on this flight. He had already completed a tour of OPS in a Stirling!