Behrman was a top-turret gunner in the 569th Squadron of the 390th Bomb Group. The 390th was, like all the other BG's that will follow in this story, part of the 3rd wing of the 8th Airforce. 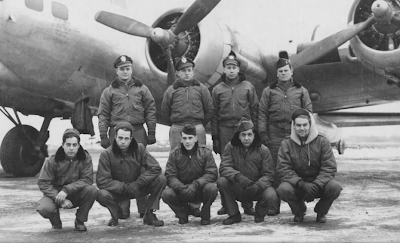 Thinking back on the Chowhound missions stirs up a lot of memories. I was on that first flight on first of May 1945. By that date the War was just about over. Our group had operational stand down after its last mission 20th of April. The planes had the bomb bays modified days before. Platforms were installed in the bays and were rigged so that they would release by the shackles had held bombs. I believe we were to carry from 2000 to 3000 lb. in the bay.

A deal had been made with the Germans that the bombers would carry no weapons. The guns were part of the ships armament and so they couldn't be easily taken out, but the ammunition was left home for this mission. On the first mission I as well as my crewmates was carrying a sidearm. A truce had been made, but some extra insurance couldn't hurt.

To insure the safety of the crews that flew the mission, the deal was to abort the mission immediately at the first signs of hostile fire. The first planes would then radio the following planes, about the incidents and they would not hesitate to take the same measurements and also abort the mission.

The flight across the Channel was very interesting because of the altitude. We came over the water at five hundred or so feet and for a lumbering (no disrespect) bomber that was rather dare devilish. We passed through a convoy and the deck crew of the ships was as clear as standing across the street from us.

The mission's target was the airfield Valkenburg. We had no trouble finding the field where the cargo had to be dropped. Opposition from air or ground was non-existent. When turning on the run to drop I could see German soldiers walking their station. We dropped the food. Because the food was in burlap bags, some did hang up on the shackles in the bay. This didn't cause trouble however, so we closed the bay and returned to the base with a good feeling. The crew that was on board was a combat crew and did its share of blowing up things. After all the destructive missions we all felt very good about this mission.

I think that the lumbering bombers that came in over the drop-zones at 150-175 knots at low altitude must have raised some spirits of the people on the ground.