Roelof Buitink, an american citizen with the dutch underground.

Roelof Buitink is an american boy of sixteen years old as the second world war breaks out in Holland. After Germany declared war on the United States in december 1941, Roelof and his family are transported to Camp Amersfoort, where they are kept until the spring of 1942. The Americans are not as worse off as the dutch prisoners that are kept in the camp, but they are hungry all the time. Over a period of time all Americans were released how ever the german kept a close eye on all of them. See www.kampamersfoort.nl for more details about what happened in Camp Amersfoort during the second world war.

Roelof Buitink and his family had been released from the camp by the time the bombers started bringing food.

Here are some of the pictures Roelof took at the food dropping at the racetrack Duindigt. 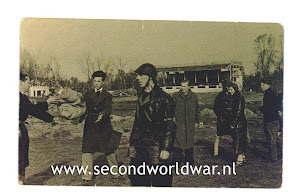 The racetrack was used as a V2 launching platform. The British Spitfires straffed it regulary. One spitfire crashed near the Buitink's home.