In early October the Dutch government had turned towards neutral Sweden for help. The ties between the Swedish and Dutch royal families were strong, so the Sweden reacted immediately. The Swedish government didn't need much time to get two huge transport ships ready for a trip to Holland. The Noreg and the Dagmar Bratt were filled with food and together they contained 3700 ton food. It took a long time before the German and English government agreed upon the conditions under which both ships could make their trip into occupied Holland. On January 24 both ships left Sweden and four days later they arrived in Delftzijl, the Dutch harbor in northeast of the Netherlands. In Delftzijl the food was loaded onto Dutch river barges and transported further towards Rotterdam. This all happened under the watchful eye of a member of the International Red Cross. On February 27 the Swedish Whitbread was handed out to the citizens of several cities in Holland for the first time.

The cargo ship Hallaren followed the other two Swedish ships towards Delftzijl. The Hallaren could carry more than 4000 ton food. This ship arrived on February 28 in Delftzijl.

At the end of March the Noreg and the Dagmar Bratt arrived for a second time in Delftzijl, delivering another precious load. The Hallaren also made a second trip towards Delftzijl, but it was not until some time after the end of the war that that food could be distributed in Western Holland. 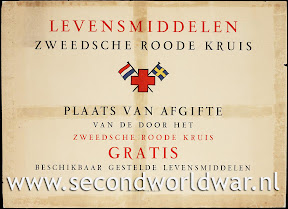