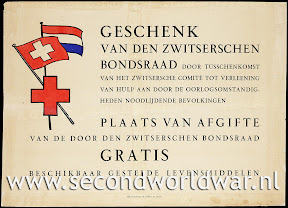 Not only aid from Sweden arrived during the hunger winter. Neutral Switzerland also stretched out a helping hand. The aid from Switzerland was an initiative from the International Red Cross. This organization had been alarmed by the messages from occupied Holland that had arrived in London. The Red Cross filled a request with Germany and England  to  deliver food  to  the  Dutch  people.The Red Cross started to build up food

supplies in Lisbon, Spain and Bazel, Switzerland.  According to the Swiss plan the food in  Bazel had to be transported down the Rhine by ship in November '44. The English didn't agree with this plan because they wanted to throw mines into the Rhine. The food eventually went to the already liberated parts of Holland where food supplies were not abundant either. The International Red Cross bought new food supplies from German stocks and that food was eventually transported by trains to Rotterdam in February 1945.

The food that had remained in Lisbon for some time was picked up by the cargo-ship Henri Dunant. That ship sailed to Sweden where it was further filled with medicines from the London Committee of the Netherlands Red Cross Society. The Henri Dunant reached Delftzijl on March 8 with 6000 ton supplies.

The tons of supplies that arrived in Western Holland were less than one fourth of all the food that was shipped from the eastern part of Holland to the west during that winter. The help from Switzerland and Sweden can however not be underestimated. The food from the neutral countries was from a superior quality than the food from eastern Holland.

"One does not exaggerate when we establish the fact that the Swedish and Swiss aid saved the lives of thousands; More than that did this aid have a positive effect on the moral of the population as a whole. People in the west did not feel entirely abandoned. The aid was recognized as the first signs of the approaching liberation, as well as a sign of weakness from the German side." (Translated from L. de Jong page 1056)